The information on this page may be used for creating journalistic content in relation to the artist. 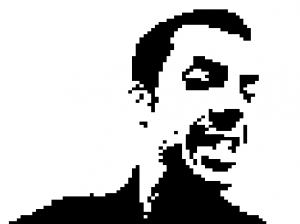 Teletext is one of the purest forms of digital art, established in the 1970s and used widely to this day, which is great testament to the medium.

It’s uncomplicated, simple, and you could pick it up within an hour. Yet at the same time, it’s capable of so much more than football results or lists of stock market fluctuations.

Early teletext art involved entering blocks of data with clunky keyboards. Technology has developed considerably since then – scanners, mice, styluses and various accessories have made the process of creating teletext art much easier.

But the maxim ‘teletext is for text’ remains true to this day. Hence, making teletext art feels as though you’re doing something you’re not supposed to, and it’s that danger that attracts me to it.

So why teletext? Well, why not teletext? I believe it’s as addictive as refreshing a Twitter page constantly.

But most of all, teletext art is fun – it never takes itself too seriously.

See here. Images may be used for journalistic purposes with credit to @illarterate or Dan Farrimond.

Copyright remains with the original publisher.

🇫🇮 The coronavirus made a notch in the pages of Teletext, but then the Finnish poet got the idea: Poems began to be published instead of canceled event information Helsingin Sanomat (17 April 2020) [Finnish]

📃 How Teletext and Ceefax are Coming Back From the Dead, James O’Malley, Techradar (6 August 2016)

📃 The Teletext Salvagers: How VHS is Bringing Teletext back from the dead, James O’Malley, Alphr (7 March 2016)