I wasn’t brave enough to add this to my portfolio, mostly because I created none of the pages exhibited… although I dearly wish I did.

Here’s a compilation of chatline art from German teletext in July 2015. This is the censored edition which attempts to conform to YouTube Community Guidelines, but I have no idea if the text is explicit as I can’t read German. I would guess so… 😛

The most elaborate teletext art broadcast in the world as of 2015 has to be the pixellated chatline girls. I’m not sure what that says about our society, but if you can drop the Mary Whitehouse mentality, they are actually quite fun. In a sinister sort of way.

Captured by Remlap, compiled by Illarterate. Pages taken from Sat1, Comedy Central Germany, Pro7, N24, Kabel1 and RTL, who presumably own the copyrights. Art is reproduced here for the purposes of art and education, but certainly not titillation. Ahem.

Music from freepd.com, which has tons of Public Domain tracks. Use it!

By the way…. German teletext is filthy. Just thought I’d let you know that. 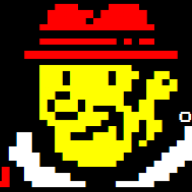